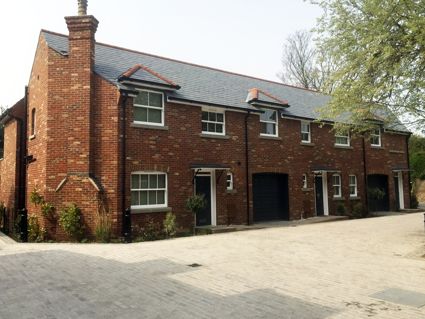 A redundant and semi derelict commercial site comprising of a 3000 square foot single storey office block and a pair of Victorian houses which had been used as a single office space for about 80 years. They were purchased and the two houses split and made habitable once planning for residential use had been granted. They were redecorated and kitchens and bathrooms were refitted. New boundaries were erected and off road parking provided before being resold.

We then worked closely with the Council Case Officers and Conservation Officer, to design a number of homes arranged around a central courtyard. The site sits within a conservation area and a period development seemed appropriate. The approved design was for seven individual homes with two or three bedrooms.

As you enter the development you are greeted by a Georgian Style house with two storey later additions. A mix of brick bonds, ground arches over windows and a mix of clay tiles and slate help to add interest and blend the site into its surroundings. The development was completed in 15 months, on budget and through the wettest winter on record.

The seven houses are currently let and managed in house with all seven occupiers commencing their second year in Crown Mews.

Click on the images below to view the larger versions.